How to Stop tantrums and improve Discipline of toddlers 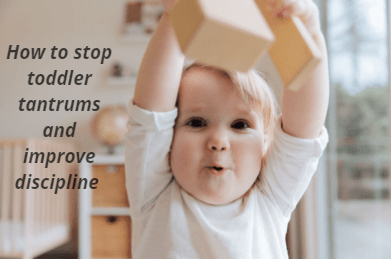 Every child has their own way of showing their frustration. And Dealing with their frustrations through effective discipline strategies can better help them in calming down, and exhibit good behavior next time around, let's have a look at these strategies.

Toddlers tend to be very black and white, meaning they like things to be very concise and clear. So if you have your routine that looks unclear to a toddler, you can expect a few more of their "toddler meltdowns!"

They like to follow an order in which they can spend their day. For instance: their routine of waking up, brushing their teeth, wanting their breakfast, cleaning their plates, so on and so forth. These activities contain a know-how feel and their something a child can relate to and does not see as a total surprise

Try giving your 2-year-old some structure in their life, if you can give them some order you'll most likely minimize their tantrums.

Before diving a little further, it's important to see why toddlers have tantrums in the first place.

Tantrums often occur due to frustration, if a child cannot cope with h/her frustrations, then at a certain level h/she might just shut down and leap into that tantrum mode.

Frustration usually occurs when a child does not get what h/she wants; for example, when "I want that cookie, and you won't give it to me, or why can't I have my toys, or why can't I wear my shoes" These are among the small things that eventually trigger disciplinary problems.

So, what do you do when you see a toddler getting frustrated? Here's what:

Kids are really easy to distract. When you see them getting frustrated engage them in a different activity, for instance, give them a different toy to play with, or take them for a walk, or if they're constantly asking for candy, redirect them to play with their blocks. Just try and derail it.

There'll be times when, despite your best efforts, your toddler will enter h/her tantrum mode. In this case, isolate them in a safe environment, don't give them too much attention.

Don't act like " I'll watch you and talk to you while you're having this", realize that during a tantrum, a toddler will seldom hear you, or try to understand rationally what you're trying to say.

When they've gone through with there tantrums, avoid asking them why they had a one in the first place, or a lecture worth 15 minutes on how they could improve. Just realize the tantrums gone. OVER—At least for the day.

If you need to work on certain aspects of their behavior, or even sit with them and talk about the tantrums, do it a day or two after the incident.

The most common mistake made by parents and guardians(—and they might not necessarily admit it) is that during tantrums, they give in too easily.

You might think that " I hardly ever give in". But what you don't realize is that it's that "hardly ever" that reinforces a toddler’s bad behavior.

You see, It's more like the infrequency; if you give in once, a toddler would expect you to do give in again, and this thought—of you giving in, convinces them to try again.

So, make it a habit of never giving in, this would really help you in minimizing their tantrums.

A question that gets asked a lot is " what do I do when my child is having a tantrum in public". In such cases you pick them up and leave—That's it.

If your 2-year-old is having a tantrum when you're midway buying groceries then a better approach would be to pick them up and leave, even if it means leaving your groceries in the aisle.

Because, if a child knows that tantrums are their way of saying they want to go—and you take them, it becomes less likely for them to engage in tantrums in the first place.

What Precautions Should Families and Nannies Follow During the Pandemic?

Precautions for families and nannies during Covid-19.

How are Nannies Better than Babysitters?

How are Nannies better than Babysitters advantages pros vs cons

How to Choose the Best Nanny for Your Baby

Advice from industry veterans on how to hire the best nanny for your child.

Get notified on new marketing insights

Be the first to know about new B2B SaaS Marketing insights to build or refine your marketing function with the tools and knowledge of today’s industry.